I apologize ahead of time for how long this post is going to be. It’s been too long since I’ve updated you all on my garden, so there is a lot to talk about! I had a batch of pictures from a few weeks ago, but the garden looks so different now that I had to take a whole new set! 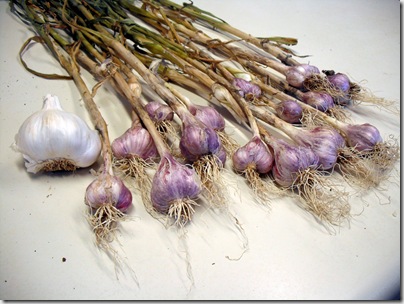 One of the first things I did since my last update was pull the garlic from the fall out of the garden. The tops had started to fall over, so I decided it was time. As you can see, they weren’t as big as the garlic I got at the grocery store, but it’s really not bad considering I stuck them in the ground last fall and barely paid any attention to them until now. I think I got 18 bulbs out. 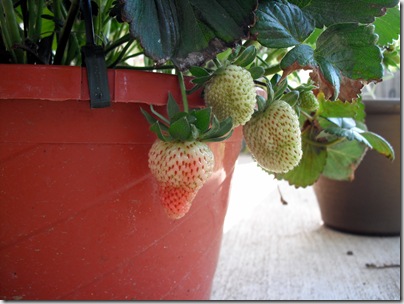 I got some hanging strawberry plants a while back, and I don’t think I showed you because I almost killed them. I didn’t realize how often they would need watering! They’re not even hanging anymore because that spot didn’t get enough sun. This picture was taken a while ago; these berries have long been eaten. We’ve gotten quite a few strawberries so far; unfortunately, they’ve been more tart than we would prefer. I’m giving them more sun and water to see if that helps them become sweeter. 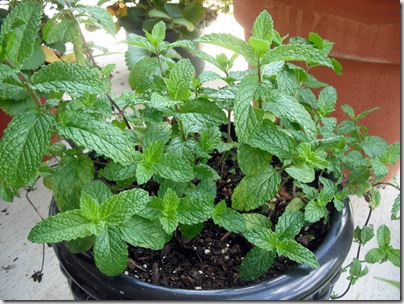 My mint is doing very well this year. I think last year I didn’t water it enough. I think it’s finally big enough to start harvesting some leaves! I think I’m going to make an attempt at mint ice cream. Yum. 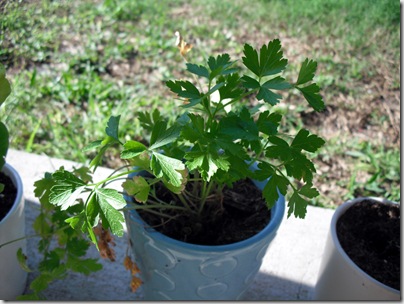 I almost killed the parsley too, but my husband rescued it for me. It has since gone in the garden where the garlic used to be. It was pretty root-bound, so I’m hoping for some fast growth so I can use more of it in my cooking. 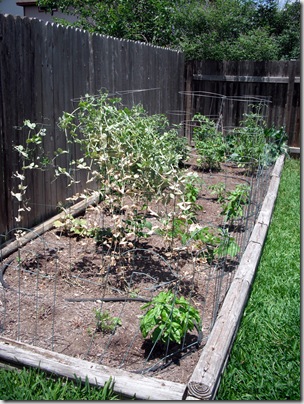 Here’s what the garden looks like today. It’s a pretty big difference from when I started! 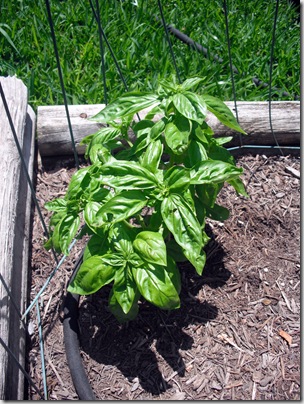 The basil has finally started growing. It stayed tiny for a very long time, and I was starting to get worried, but it is taking off now. 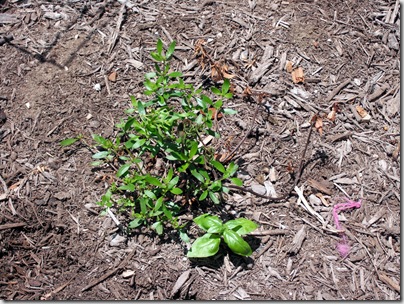 The oregano has died back a little bit, but I’m not too worried about it. I think it’s not getting enough water from the soaker hose, so I’m going to give it a little extra every once in a while to keep it going. (That little basil plant next to it is from last year; I had let it go to seed by accident, and now I have all kinds of little basil plants popping up in random spots in the garden!) 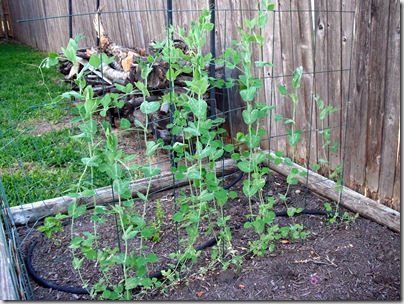 This is what the snap peas looked like a few weeks ago. Nice, green, and healthy. 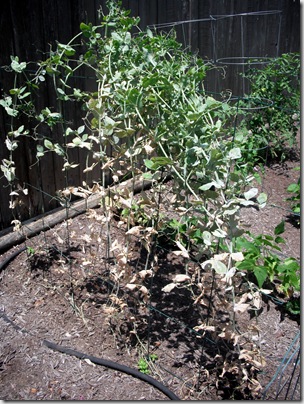 This is what they look like now. This same thing happened to me last year; the peas died from the roots up, turning a white, chalky color and then drying up. I can’t figure out if it was a mildew problem, or if this is the normal cycle for peas, since I’m pretty sure they aren’t supposed to fruit for a very long time. I could be totally wrong, though. 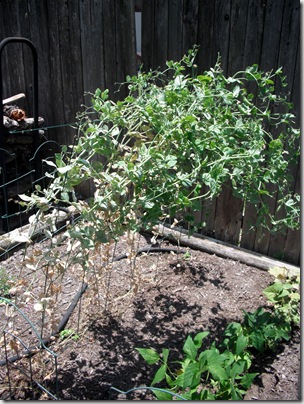 They grew much taller than the support I had as well, and are nearly toppling over right now. They taste delicious, though! 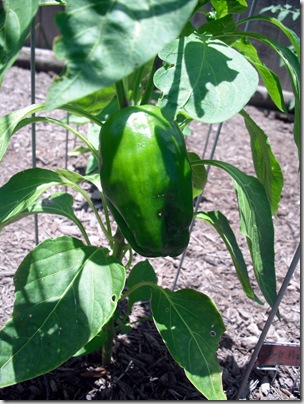 I have my first bell pepper! It still has a few weeks until it is ready to be harvested, but it’s so exciting to see the first one. I can’t wait for all the peppers we’re going to get this year! We have some huge tomatoes growing too. They are just now starting to change color, so I’ll probably take them off soon and let them finish ripening in the windowsill. I’ve seen a birds in the garden frequently, so I know they won’t last long if I let them turn red on the vine. 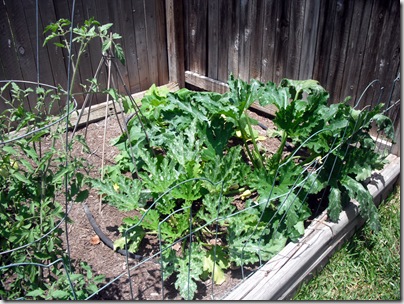 The squash is taking over the garden again. Which I love. I’ve already harvested almost two pounds of zucchini and yellow squash! We had cheesy zucchini last week, and hubby almost liked the squash. It helped that it tasted mostly of cheese. 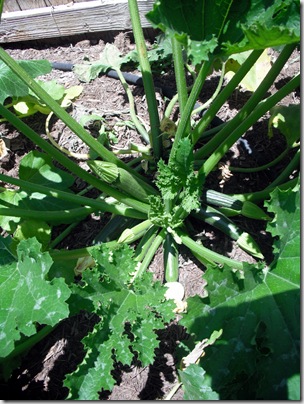 I think there is going to be a lot of grilled squash and zucchini bread in my future. 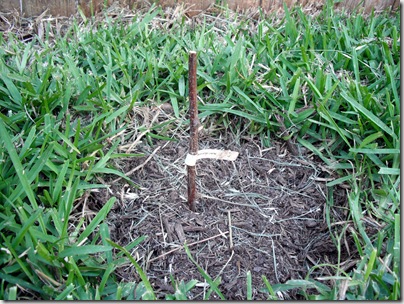 In some very exciting news, I planted a stick! Ok, not really. Though it does look like it. I bought a dormant blackberry plant, and it came bare-rooted and looked like a stick. 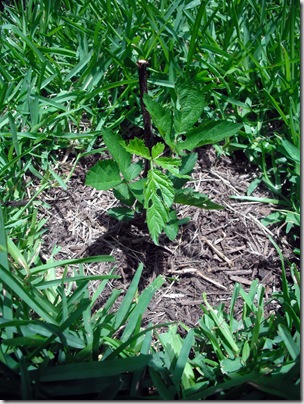 After about a month, the blackberry plant finally has some growth. It’s too bad I have to wait a few years to get any berries! 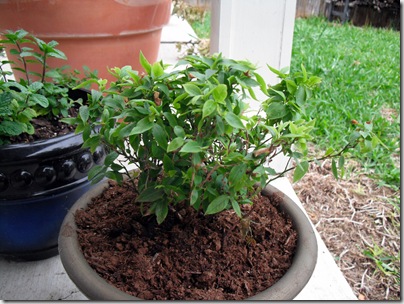 I also bought a blueberry plant for hubby. This one is going to stay in pots so that we can give it the acidic soil it needs. Its growth has been slow as well, but it shouldn’t take as long as the blackberry plant to get fruit. I can’t wait to get fresh blueberries.

Don’t forget to check out GrowCookEat for more information about gardening and cooking. This week’s post is a Q&A on organic gardening with a giveaway! Woohoo!